Future’s music video for “Mask Off.” Future unleashes the movie-like visuals for the fan-favorite (and viral) single “Mask Off” from one of his two recent albums. Future drummed up anticipation for the Colin Tilley-directed music video by way of a face-removing trailer a few days ago, and the full video is just as chilling as that 20-second clip. 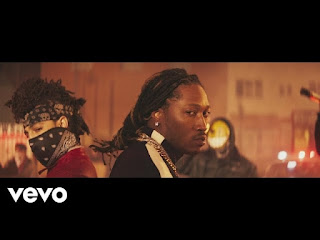 Future enlists Amber Rose as his co-star for the video, funnily enough, seeing as she’s BFF with his previous music video co-star Blac Chyna. The flute rhythm of the song kicks off following a corner store robbery, as Future cruises around with Amber in a sleek car, while outside appears to be destroyed and dark–apocalyptic-like.