An adage says to whom much is given, much is expected. From 2010 when he released his debut single “Eni Duro” till this moment, Olamide Baddo has been enjoying undying love from the street. 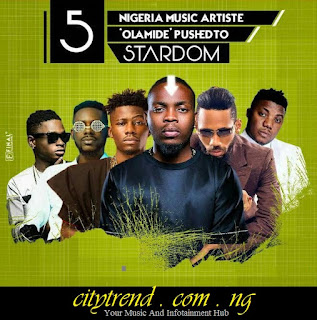 Apparently, it is safe to say that the street made him the Baddo that he is today. In an attempt to give back to the street, he has helped a whole lots of raw talents on the street to get much needed recognition in the music industry.

Here is the list of artistes Olamide has helped their career:

1. Lil Kesh : He was just a street boy doing freestyles around secondary schools in Lagos before he got an encounter with Baddo with the help of his friend Viktoh. Olamide signed him up to YBNL and now Lil Kesh has grown so big enough to float his own record label “YAGI” after expiration of a successful record deal with YBNL.

2. Adekunle Gold : The year 2015 was the year Adekunle Gold started living the life of a star after Olamide Baddo got him signed up to YBNL as the only singer on the label. Today, the Sade crooner can only thank God and Olamide for what he has achieved so far in the industry.

3. Ycee : The Tinny Entertainment act, YCee came into limelight by dropping a very big hit track titled “Jagaban“. Despite this hit single, YCee was still finding it hard to sustain his newly found street love. Four months later when he remixed the song with Baddo, it becomes crystal clear to everyone that YCEE has come to stay.

4. CDQ : He got his big break into the music industry after a jamming collaboration with Olamide Baddo on the song “Woss Wobi”. The song successfully went viral because of the presence of Baddo on it which makes it easy for fans to fall in love with the unique style of “CDQ Yeeye”.

Tracks like Ghost Mode, Dope money and many other hit collabos that Phyno had with Olamide at the early stage of his career made him a Big Star that he is today.

True or False? Drop your comments below.