CityTrend – You have to cut Nigerian Female Artistes some slack for dare competing in an industry that is male dominated. The ladies in music account only for a not-so-much percentile of the Nigerian Music Industry. 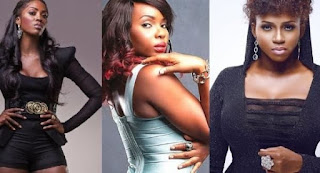 The guys maybe taking home good money but hey, the ladies are cutting big paychecks too. And they are equally doing good. The hustle is real for either male or female artistes.

However, this post highlights the top 10 ladies in music taking home the fattest paychecks. The net worth of some of our top female musicians will be analyzed and estimated to the most realistic value. Estimates are made from their performance/appearance fees, endorsements and music sales and tours.

Here is a quick rundown of an estimated analysis of the net worth of the Top 10 Richest Female Nigerian Artistes 2017.

10. Niyola – Eniola Akinbo : Is Empire Mates Entertainment (EME) first lady. She is no new comer as she began her music career in 2005 as an affiliate of Eldee’s Trybe Records. Subsequently, Niyola was officially signed to EME in 2012. She is best known for her breakthrough Afro R&B hit ‘Toh Bad’ which earned her a couple of nominations and a Nigerian Entertainment Award as “Best Female Artiste” in 2013. The female singer and songwriter has an estimated net worth of $500,000.

9. Nneka – Nneka Egbuna : Simply known as Nneka, is a Nigerian hip hop/soul/reggae singer, songwriter and actress based in Germany. She sings in Igbo, English and Nigerian Pidgin. She is one of the earliest Nigerian musicians to have bagged a music recording contract with international music giants Sony Music. Nneka has also worked with Reebok and her track “Shining” topped global charts in 2013. Her song “Heartbeat” has been remixed and sampled several times – most notably by Chase & Status and Rita Ora respectively. Her estimated net worth is put at $1.3M.

8. Cynthia Morgan – Cynthia Morgan aka Madrina : Is arguably Nigeria’s number one female reggae and dancehall. She is signed to Northside Entertainment Inc. She broke into Nigeria’s music landscape with her songs ‘Don’t Break My Heart’ and ‘Lead Me On’. The female dance-hall act who maintains a fierce red hairdo is valued at an estimated $1.5M net worth.

7. Waje : Waje Iroube who hails from Edo state. The female singer is known for her vocal prowess, she has had endorsement deals with Glo, and numerous humanitarian NGOs. Waje headlined the song ‘Strong girl’ which is the theme song for ONE Campaign’s ‘Poverty is Sexist’ in 2015 and also joined Bono in Lagos, Nigeria for the Lagos campaign in 2015. Waje is among the judges for music reality show franchise The Voice Nigeria alongside 2Baba (2face Idibia), Timi Dakolo and Patoranking.

The songstress net worth is put at an estimated $1.7M.

The award-winning singer however, made a theme song ‘Place to be’ for Guarantee Trust Bank which she received a bogus payment. Only recently the singer disassociated herself from the Nigerian bank for undisclosed reasons.

Asa’s net worth is placed around $2M which places her ahead of Waje.

5. Seyi Shay – Deborah Oluwaseyi Is a female Nigerian artistes with a good discography to her name. The former X Factor UK contestant and Island Record UK artiste stands at number 5 on the list. Seyi Shay currently has a running endorsement with international beverage company Pepsi. The ‘Murda’ crooner has had a stint with Etisalat and Samsson phone as brand ambassador. Seyi Shay is one of the most sought after female Nigerian artistes with high performance fees. Also she recently landed an ambassadorial deal with emerging phone brand Gionee in 2017. Her net worth is put at roughly $2.1M.

4. Chidinma – Chidinma Ekile : Who is also called Miss Kedike owes her fame to music reality show MTN Project Fame where she emerged the winner of the 3rd season of the show. Her real taste of fame came after her hit single ‘Kedike’ which she released after project fame. She is also a brand ambassador for MTN. She has had the opportunity of being featured on Coke Studio Africa for some years. The petite and light-skinned singer regarded as a top female music act both in Nigeria and around Africa. She is valued at an estimated $2.7M.

3. Omawumi – Omawumi Megbele : Is a lawyer turned singer. Just like Chidinma, Omawumi gained prominence after she emerged 1st runner-up on maiden edition of music reality franchise West African Idols. Since then she has proven to be one of the best vocalist and songstress here in Nigeria. So far Omawumi has two albums to her name ‘Wonder Woman’ (2009) and ‘Lasso of Truth’ (2013). She performs at high-profile government or social events with juicy paychecks. The ‘Play na Play’ crooner has endorsement deals with Nigerian e-commerce company Konga, Malta Guinness and telecom Glo. Her net worth is estimated to be $3M which makes her number 3 on the list.

2. Yemi Alade : The ‘Johnny’ crooner stands at number two as the Top 10 Richest Female Nigerian Artistes 2017. Yemi Alade is the queen of YouTube Nigeria, with over a 100 million views on her music videos. ‘Johnny’ remains her best single yet statistics wise, with over 70 million on digital streaming platforms and YouTube accounting for over 60 million of the total.

Related :   Sales Of Form And Audition Date For Miss Pentecostal Nigeria Is Out

Yemi is a brand ambassador for ABC hair relaxer, Nairabox etc. She has two albums to her name ‘King of Queens’ (2014) and the highly acclaimed ‘MAMA AFRICA’ 2016. The singer cuts big checks for her performances across Africa. Miss Yemi Alade’s net worth is estimated to be around $4.2M.

1. Tiwa Savage : Mavin Records First Lady and mother of one, Tiwa Savage. The singer is arguably the richest female music act in Nigeria with two albums to her credit ‘Once Upon a Time’ (2013) and ‘RED’ (2015).

Do you think these list “Top 10 Richest Female Nigerian Artistes And Their Net Worth – 2017 Reports” is incomplete? Make use of below comment – CityTrend