Yesterday’s morning was one of those mornings when you wake up and you don’t even know what you want to do with your life. Those mornings you would come up from your bed, pick up a kitchen stool sit in the veranda and wonder if you had any dreams last night, if it was Chinwe that was romancing you in your dream or Ifunanya that bought you a wrist watch. 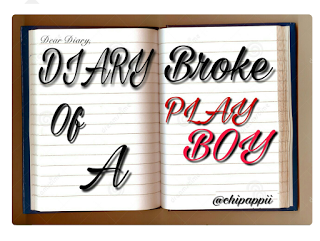 I merely brushed my teeth and strolled out to a popular spot where the guys in my hood normally met to sample passing girls, discuss the games they were going to stake on or talk about how posh their wedding in Dubai will be when they can’t even afford a plate of rice for their girlfriends.

I sat in the company of some guys who like me had nothing to do that morning. They were talking about how Manchester United destroyed their various tickets. I was just there listening and hissing.

Like 5 minutes after i got there. Across the road from where we sat, a fight was about to break out between two teenage girls, one was light skinned and the other was Chocolate. We paid little attention to them. Everybody had his own problem. I Managed to grab some words from their vulgar exchange. They were fighting over some guy.

Before long, they were both pulling at each other. They had no hair on their head so they resorted to pulling on their clothes. I was expecting the guys with me to go and do something, instead they sat and just stared at them while they continued calling on their village deities on man u’s head. Me too, i stared on like i was live on MONDAY NIGHT RAW.

“I swear that girls breast has stretch marks” one of the guys with me shouted.

As if on cue, the chocolate girl tore at the light skinned girls top and a part of her breast showed. There were clear marks on it.

I looked at the guy and asked him how he knew about the stretch mark.
“Guy you be learner o, So u no know say na because of me them dy fight” the guy told me with a thick mark of indifference on his face. I looked at him with utter disbelief, got up, wiped the dust from my trouser and left them. I looked once more at the girls, they were already as dirty as they can be and were pinning each other on the electric pole. I could hear the guys change their topic. They were talking about stealing the wire on the pole since nepa hardly brought light.

I hissed and continued on my way to Ifunanya’s house. My dreams usually come true and i needed that watch.

Konji is a bastard son of a thousand fathers.

So i was in a bus on my way to the market to buy a trouser for church service. The next day being Sunday and i needed to look good for that girl that had caught my eyes since the first day i saw her.

My Facebook messenger binged. I opened it and it was my new Ghana girl. She said hi, i said hello. We started our usual chats. I usually don’t like going far with girls that i’m sure won’t be of any benefit to me. So our chat was mainly about what she ate, how she ate, the color of what she ate and who cooked what she ate. You know the usual Facebook chat.

So i decided to check out her Facebook photos once more. I saw she had uploaded new pictures. These ones were clearer than the ones she uploaded in the past.

I seemed to notice that all her features were clearer here and she has joined Facebook bad gang. The ones that purposely flash their boobs and booty at the camera. My Hot mind set it. So i decided to take the convo deeper.

Me: so what are you doing?

Me: well, am on my way to the market. So can i join you in the bath?

Her: sure, i will increase the bath water.

Me: just pull off and wait for me.

The convo got more kinky. My joystick had already tripled in size. We were both enjoying ourselves.

We were at the peak of it all when the bus came to a halt. My joystick was still as hard as olumo rock. I looked up from my phone and everybody was alighting from the bus. I noticed i had gotten where i was supposed to get down. The conductor looked at me.

Me: I never reach my bus stop naa

I looked at him with sweat all over me and observed my joystick,. In my mind i was like “Oga go down naa”.

Only God knows how i managed to leave there that day with my erection.

These days. I have learnt to pocket my phone anytime I’m in a bus…