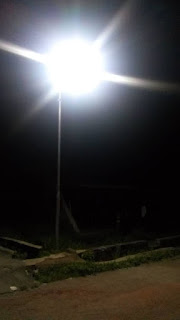 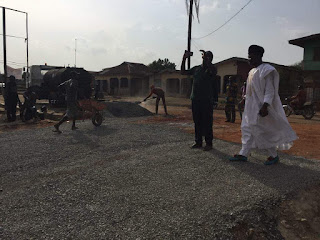 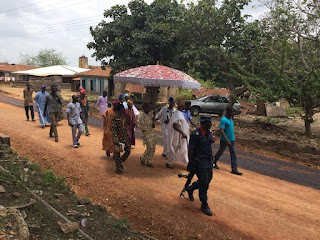 The Chiarman Council of Owu OBA and Chifes, Olowu of Kuta, State of Osun, HRM Oba Hammed Oyelude Makama, Tegbosun III, has facilitate rehabilitation roads and light up major streets in his town, Kuta.Through his Networks of Contact from the federal government.

The amenities, according to the workaholic monarch are facilitated protect lives, properties and security of his subjects, noting that those objectives, aside food and shelter are primary duties of a responsible father.

The construction of 2km road from Bank junction to station road and Market square to Ikoyi is an evidence of a father committing his life to humanity.

Olowu equally sponsored the installation of solar light from the community (kuta) entrance to Ikoyi way and at Onikoyi Palace.

Olowu states his stool was founded on service mission of which his target is to improve the tempo as laid by the founding fathers. Oba Makama called on sons, daughters and residents of the ancient town to emulate his life commit to building a new Kuta of our dream.

In his words ” kuta was founded on a service mission, selfless service I mean. The spirit of serving is in all the authentic Owus. When I do for people, I don’t expect thank you because my throne, my history, my blood are made to render succour”

“The road rehabilitation and solar street lights to my town are just the tips. Though, I’ve done many things multiple of such for my people but I strongly belief in the aphorism that says the reward for hard work is more work. That is the philosophy I place my service on. A new Kuta of my dream is realizable with a step to steps. I’m laying a foundation worthy of emulation to pay off in no distance time” Olowu.

A socio-elite forum, Kuta Youths Forum (KYF) commended Makama for his exemplary leadership since enthronement, calling on influential sons and daughters to drum support for the monarch.

According to the forum “As a community, we have been at the success side of the luck for having HRM. Oba Hammed Adekunle Makama Oyelude (Tegbosun III) as our monarch.
Your wealth, richness and popularity can only be determined by the people around you not your saving balance nor your flamboyant life”

“Olowu of Owu Kuta tuntun has on countless occasion proven to the entire community that he is ready to give the community a new tag with flows of achievements”.