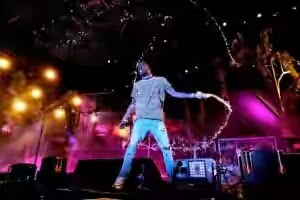 The first one’s produced by Sevn Thomasa, the second is produced by Murda Beatz, and Southside did the third one, the weekend,Travis was taken into custody after his show at the Walmart Ampitheater in Rogers, Ark. TMZ said he was arrested on charges of inciting a riot, endangering welfare of a minor and disorderly conduct, and a large part of the show is caught on camera.