Halsey debuted the sinister, dark-electro song “Eyes Closed”> that’s on her sophomore album, Hopeless Fountain Kingdom. R&B star The Weeknd co-wrote the dark, synth-y track. even to the ominously sensual lyrical themes about having feelings for an ex-lover while in a new relationship. “Now if I keep my eyes closed, he looks just like you,” she sings on the chorus. “But he’ll never stay, they never do. 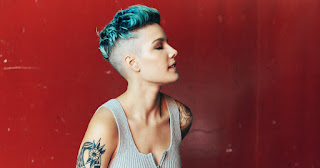 Halsey opened for The Weeknd back in 2015 following the release of his album Beauty Behind the Madness. The younger singer is setting out on her own massive headlining tour this fall, playing arenas with opening acts Charli XCX and PartyNextDoor. Her tour kicks off on September 29th in Connecticut, and Hopeless Fountain Kingdom will be released on June 2nd.