It is great news to announce that four of Nigeria’s best musical artistes have made it to the the top ten richest african musicians in the American business magazine, Forbes Africa. The artistes who made it to this list are Don Jazzy, Wizkid, Jidenna and Davido including other African acts such as Sarkodie, Tinashe and more. 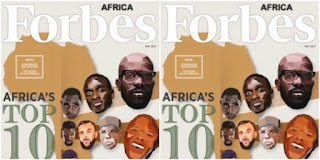 Check out the full list and the placement of each artiste.

1. Akon (Senegal) : Born Aliaume Damala Badara Akon Thiam is an Ameriacn singer songwriter, rapper, and producer whose song “Locked Up” in 2004 skyrocketed him to stardom. He has sold over 35 milllion album globally, been nominated 5 times for grammy with 45 billboard hot 100 songs under his belt. He is at the top of this chat, ranking as number 1 in the whole of Africa.

2. BLACK COFFEE: His real name is Nkosinathi Maphumilo, he is a South African record producer, Dj, singer and an entrepreneur. Black Coffee has released 5 Albums as well as live DVD under his Johannesburg based record label and people are already saying he might just be the most electronic Music Producer of his time in Africa.

Related :   #BBNaija 2018 Rules For The Housemates

3. HUGE MASEKELA : This South African singer has released 43 albums and performed with Marie Gaye , the Byrels and many more!

5. TINASHE : The 24 year old Zimbabwean-American singer who started singing even before she could talk, made her first appearance in 2000 in the film ” Cora unashamed” her voice starred in the cartoon feature film “The Polar Express” along side Oscar Winning actor, Tom Hanks.

6. JIDENNA : Jidenna Theodore Mobisson is known as Jidenna, an American artist , record producer was signed by Janelle Mona’s Wonderland Records Label plus collaborations with a number of artist including Roman GianArthur , St .Beauty, Deep Cotton and Janelle herself.

He is a Founding member of “Fear and Fancy ” a social Club in California in 2006 .

7. WIZKID : Ayodeji Ibrahim Balogun (born 16 July 1990) popularly knaown as Wizkid is an award winning Nigerian singer and songwriter who started recording music at age 11 and managed to release a collaborative album with the Glorious Five, a group he and a couple of his church friends formed. The artiste’s hardwork has earned him a great musical reputation in the industry and his contribution to the Nigerian Music Industry has earned him several achievements, including a BET Award, a MOBO Award, 5 Headies Awards, 2 Channel O Music Video Awards, 6 Nigeria Entertainment Awards, 2 Ghana Music Awards, 2 Dynamix All Youth Awards, 2 City People Entertainment Awards, and a Future Award. He has received 3 nominations at the MTV Europe Music Awards. He has also been nominated over 3 times at the World Music Awards. His recent single “Come closer” is still gaining stand on local and international charts and he is number 7 on this list.

8. DAVIDO : David Adedeji Adeleke, popularly known as Davido, is an American-born Nigerian recording artist, performer and record producer. His 2011 single “Dami Duro” was well-received throughout Nigeria and pushed him from an upcoming act to an A lister. He has awards to his name, singles that we have all loved with the present one being “IF” that everyone is enjoying and looking for the 30 billion in their accounts.

Related :   Secret stories about Naira Marley and is music career.

This artiste is the first Ghanaian to win the BET Award for Best International Act Africa in 2012 and was nominated in 2014 and 2015. In 2010, he received series of awards and nominations ranging from “Artist of the Year” to “Album of the Year” in Ghana. His sophomore album, Rapperholic, was the recipient of 3 Ghana Music Awards from 12 nominations, and he has four studio album to his name.

10. OLIVER MTUKUDZI : He is the last man on the list, ranking number 10. He is a Zimbabwean musician, businessman, philanthropist, human rights activist and UNICEF Goodwill Ambassador for Southern Africa Region. Tuku is considered Zimbabwe’s most renowned and internationally recognized cultural icon of all time. The iconic musician has 57 albums under his belt with 24 awards to his name.

Is your favorite artiste on this list? Let us know.