It is with great pleasure to introduce the man without promises but vision of success.
Often people brag about achievement and success or class but never have I heard this man talk about it, instead he is more focused ​on the tasks at hand. 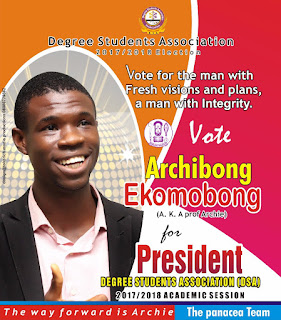 Yesterday was an experience and today a mistake was made but tommorow which is the future is meant to be different because I was told that the past is an assessment of the materials needed to correct and coordinate the future.

Who else is worthy of driving the DSA??
Who else is capable of moving us to the next level??


He was the NACCOS president for 2012/2013 and with a meager income he honestly managed the affairs…..his record still speaks, facts don’t lie.

He is intellectually sound as he has received three (3) federal government scholarships and one from the ADB.


And many more, talking about him will only lead us no where and the point is, your vote is your legal right and responsibility, don’t repeat the mistakes​ of the past. Vote a man whose silence are achievements.

VOTE FOR YOUR FUTURE

Vote
ARCHIBONG EKOMOBONG
(A.K.A Prof Archie)
As President of the DSA