Last night a shocking but intriguing picture of the current office of the DEGREE STUDENTS ASSOCIATION (D.S.A) proposed and approved budget was released and this has left so many speechless. 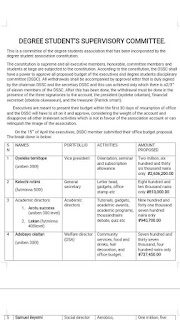 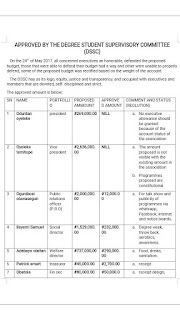 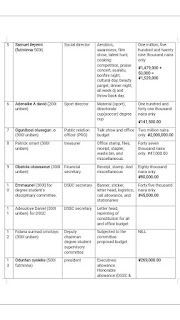 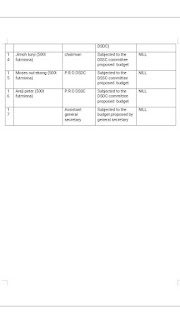 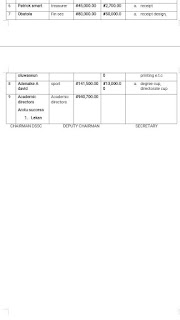 This was posted by an unknown individual but has been identified as a member of the DEGREE STUDENTS SUPERVISORY COMMITTEE (D.S.S.C). Some think it’s propaganda, others say it’s stealing but however none of the DSA member has said anything pertaining this issue.
However there has been several arguments on the school platforms, some say it’s political propaganda, others say it’s corruption and stealing but we can never know what really happened but hopefully the DSA AND DSSC will share more light on the issue on ground.

Well if I must add a wise man once said politics is a sweet but dangerous game to get involved in, and that appointment and delegations are to coordinate and guide the Democrats. Democrats in this context means the governed individual ( the degree students) for transparency and accountability the budget was posted for the Congress to see and know how they are being lead if majority keep Against the Revelation of the current office of the DSA it is only to correct the successors on how to govern the Congress.

Reviews on the Constitution shows the purpose of the DSA… Chapter 1- Article 4 section 1 States:

MEMBERSHIP
Membership of the DEGREE STUDENTS’ ASSOCIATION shall be voluntary and shall consist of the following;
FULL MEMBERSHIP
HONORARY MEMBERSHIP

HONORARY MEMBERSHIP
Honorary members of the Association shall be given by the Executive Council, which will be passed to the Supervisory Committee (DSSC).
The nomination shall be based on individual outstanding interest in Students’ welfare and academic matter as relating to this Association and contribution to the educational development in Nigeria.

Also chapter 2- Article 5 section 1 subsection 7 which states:
In the event of any matter arising which is not wholly or in any part covered by this constitution of the Association, the Executive Council in joint meeting with the Degree Students’ Supervisory Committee shall have powers to deal with such matter to the best interest of the Association.

While chapter 2- Article 6 section 1 subsection 7 states: the president shall present the sessional budget of all the Executives to the DSSC.
The Audit committee will clarify things.


A copy of the DSA Constitution will be provided based on individual request individual assessment.

Remember your vote is your legal and Constitutional right don’t DONT SELL IT.