Hibernate and sleep mode are two different type of function in a computer that does almost the same thing by putting the computer into an easily recoverable mode compared to shut down but have have differences in the way the do it. 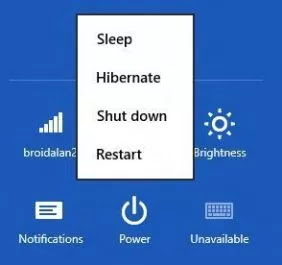 Sleep: This is a mode whereby the computer uses minimal power input to maintain the Standby in memory and pauses its state. The state is usually expressed by a blinking light

With the press of the power button the running operations will be resumed.

Hibernate: This is involves powering down your computer, While the state is retained. When hibernating the content of the memory (Ram) it is saved in the permanent memory of the computer. An image of the computer is saved in a non-volatile storage media such as hard drive, and when resumed the image is used to restore the computer to the previous state.

When the power button is pressed again, the computer boots up and restores the computer to the former state using the image created earlier.

Eg: suppose two programs are running and the internet is connected before hibernating. When the computer is hibernating, it saves the data in the RAM to the hard drive and completely turns off the computer. When resumed the computer starts the operating system and restore the 2 programs to the former state, but the internet connection might or might not connect; this is due to the connection type and the configuration of settings.

What is the difference between Hibernate and Sleep on a computer?